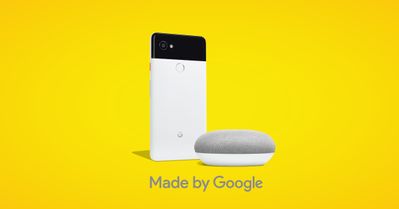 Remember when Google was just a search engine? The bevy of new products Google announced on October 4, 2017 underscored how far it has moved beyond its roots. Clearly, Google is serious about being a major player in artificial intelligence and a leading device maker as well.

As far as devices go, Google started dabbling in smartphones in 2006 but it wasn’t until 2010 that it came out with the Nexus One, based on HTC’s technology and know-how. There followed a series of Google-branded products made by LG, Samsung and other tech giants. These included smartphones, tablets and computers.

In 2016, Google decided to go it alone and released the Pixel and Pixel XL phones, both sporting the label “Made by Google.” Now, a year later, Google has taken a big stride by showing reporters a dramatically expanded family of “Made by Google” products.

The Pixel 2 and Pixel 2 XL are logical updates of the phones released in 2016, which also came in 5” and 6” frames. The design isn’t eye-popping but the metal housing has a classical refinement. On the back, there’s an impressive 12 MP main camera with an f/1.8 lens. Google is claiming to have the best camera on the market again this year and, based on the demo, it’s not an idle boast. To be sure, photos like this will take up a lot of space, but Google is offering buyers free unlimited storage for their pics and videos. Under the hood is a Qualcomm Snapdragon 835 processor with 4 GB of RAM. There is no headphone jack but you do get a Type C to 3.5 mm adapter that lets you plug your earphones into the USB port. Squeezing the sides of the phone launches Google Assistant. The base model Pixel will sell for $899.00 and you can pre-order it now. It will be launched on October 19.

To make up for the lack of a headphone jack on the new Pixels, Google has designed its own wireless earbuds. Like every earphone manufacturer, Google is promising top-notch sound quality and comfort. Pixel Buds will come with a charging case. Tapping on the touch-sensitive exterior of the bud activates basic functions as well as Google Assistant. One attractive application of this feature is the way it can be used to launch instant translation of a one-on-one conversation. Pixel Buds will go for $219.00. The release date has not yet been announced.

Priced at $79.00, the hockey puck-sized Google Home Mini will appeal to new users. If you already own a Google Home, the Mini will extend its range. The bigger and tougher Google Home Max was also introduced today. What sets it apart is definitely the speakers. In addition to all that Google Assistant technology can do, the Max delivers rich and powerful sound that will make it a head-on competitor for Sonos and other connected stereo speakers. We don’t have a release date or price yet, but it will go for US$399 south of the border.

The Pixelbook is the first laptop computer to include Google Assistant. So you can talk to it the same way you can talk to your phone. The 360-degree hinge lets you convert it to a 12.3” tablet. For the hefty $1,299.00 price tag, you get:

The Pixelbook runs on Chrome OS, which is a relatively barebones operating system but one that can actually do a lot and do it fast. It’s worth noting that the Pixelbook supports Google Play apps, so you can download your favourite apps and use the Pixelbook’s touchscreen to run them the same way you do on your phone. The Pixelbook will be available around October 31, 2017.

Google unveiled many products at its October 4 event. It will take us days and perhaps weeks to test and digest them all. What about you? Do you see any of these devices in your future, and if so, which ones?