A match made in digital heaven? 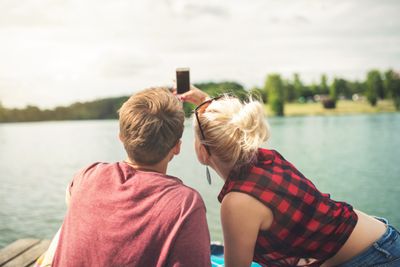 I went off the dating market some eight years ago, back when Iron Man 2 came out and the first iPad was released. There were plenty of dating sites back then, but nothing that compares to today's Tinder or happn.

Love in the digital and hyperconnected age is a fascinating topic. Equipped with just a first and last name, you can track down an enormous amount of information about your crush. First comes the initial interaction on social media, followed by an exchange of messages, and only then—potentially—a date.

The Internet is part of the hunt: you scrutinize your new flame’s Facebook profile like an employer scrutinizes a résumé. Does your potential date share your love of travel? Browsing through their photo albums titled “Thailand 2012,” “Peru 2014” and “Norway 2017,” it would seem so. See, you already have something in common!

We tend to be very generous with the information we share on social media sites like Facebook. So much so that big data analysts might be able to successfully predict a budding romance. But can the number of positive interactions between two people (a “like” here, a photo comment there) really foretell whether they’ll go on a date? Or how soon they'll have their first kiss?

Eulerian Inc., a company that specializes in big data analysis, was asked these very questions. It was a hypothetical exercise, but the results are entertaining—and frankly a little disturbing.

According to the experts, we can predict whether two people will go on a date by analyzing public data. This involves examining the recurrence of certain interactions. You can probably recall a time when you added that special person, liked their photos or comments for the first time or first commented on their status. These actions leave traces whose correlations, according to the experts, can predict the likelihood of going on a date and how soon that date will happen.

In fact, we can do even more. Because of the large amount of information we share online and the many hours we spend on social media, we leave much more than just a public trace. If a platform like Facebook were to make available all the interactions between two people, we could make even farther-reaching romantic predictions.

Let's imagine for a moment that we had access to data such as:

Obviously this data isn't public, but if it were, Eulerian claims we could predict a new romance (in real life) and even estimate when the couple will kiss for the first time.

Say you've been in contact with someone for a month. You've liked around 20 of their photos and 30% of their comments, and you've commented on a quarter of their posts. Based on this information, we can conclude that your first kiss will occur within three months of the initial friend request.


Again, this data isn't accessible, and the correlations are just part of hypothetical exercise performed by the big data experts at Eulerian. It all sounds a bit Black Mirror, but it's important to keep in mind that such data exists in large volumes and access to this data depends on a company's ethics rules.

Just like Amazon tries to predict our next purchase before we even know we need something, perhaps companies will know we're about to fall in love even before the first spark is lit.

So, would you sacrifice the magic and mystery of love and offer your data to a company that promises to find your perfect “match 2.0”? Can big data deliver a match made in digital heaven?