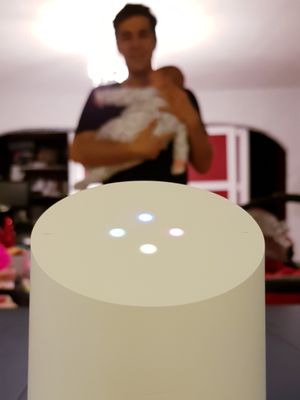 For the past six months, my family and I have been testing Google Home, an intelligent personal assistant for your home. It’s like a smart, internet-enabled speaker that responds to voice commands. Still not clear on what it does? Imagine if your Siri, Cortana or Google Assistant jumped out of your phone and into a speaker in your house.

The device itself looks unobtrusive, like a decorative vase or candle with a fabric finish around the base. But inside there are two microphones and speakers, allowing the device to hear you and talk to you. The top portion is a smooth, touch-sensitive surface that allows you to control the device with touch commands. Configuring Google Home is easy and takes just a few minutes using the application. Then you’re ready to give instructions or ask questions starting with “OK Google” or “Hey Google”.

The Google Home has been available in the United States since November 2016, but the French-Canadian version came into my life last June, just days before my second child was born. The device proved very helpful while my hands were busy prepping bottles, changing diapers or cuddling my little bundle of joy. Since Google Home is compatible with various applications and services, I found it easy and practical to ask it to “play some U2 songs” or “play my list of Baby #2 songs.” The Google Assistant does this by accessing my Spotify or Google Play accounts.

It works the same way with radio, because Google Home is compatible with Tune In. It goes without saying that the Assistant “speaks” with ease to Google Chromecast, meaning I can use my accounts to watch videos on line. Since I did all these entertainment operations using voice commands, I never had to dangerously juggle my newborn and smartphone.

For my other child, who is three, Google Home is a source of information, a learning tool and a jukebox. She and I are both amazed by the educational games available through Google Home. For example, our family has had tons of fun taking quizzes in which each family member has to answer questions asked by Google Home. These days, people rarely gather around audio devices with no screen. My daughter also enjoys learning more about real people and fictional characters by asking Google Home “Who is Santa?” or the less-cute “Who is Donald Trump?" An easy way to keep kids like my daughter entertained is by asking Google Home what sounds animals make. Listen for yourself:

Wondering about Google Home for grown-ups? I mainly use Google Home to play music. Paired with my Spotify account, the Google Assistant plays all my special requests and the sound quality is surprisingly good given the size of the device. It won’t get a party started in a school auditorium, but it does a really good job for a large room in your house.

Also, Google Home is connected to practically all the other information in my Google accounts. I can use it to check the weather, events in my calendar and traffic. It can even set a timer or calculate how long it will take me to get to work. I recently started using it to place calls and to control my recently purchased smart lighting systems.

I should clarify the version of Google Home I use is not a French translation of the U.S. version. It’s a decidedly Quebecois version. The device understands my accent and even uses some regional expressions. In fact, the team behind its development taught it some pretty funny answers—the sort of thing that will make your French-speaking friends chuckle when they come over. If you set your user settings to  French Canadian, try out these commands:

Checking my Google Home usage, I learned that 70% of my requests were for music (or radio), 15% were for weather, 10% were for my agenda, and 5% was for miscellaneous (games, quizzes, animal sounds, general queries, news headlines, etc.).

Intelligent personal assistants may still be a curiosity, but they’re sure to become mainstream in 2018. The French-Canadian version of Google Home isn’t as versatile as the U.S. version, but with updates, there will be more and more services for us too. Already, I feel that Google has given me a head start.

What about you? Are you interested in trying this type of assistant? Treat yourself, get the Google Home now!