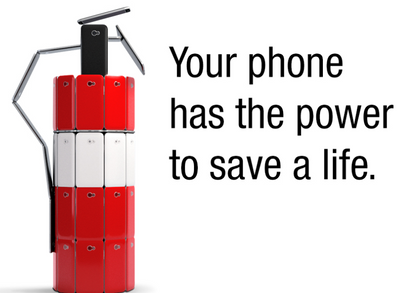 The Alert Ready system was developed in partnership with federal, provincial, and territorial emergency management officials, Pelmorex Corp., the broadcast industry, and wireless service providers to ensure you receive emergency alerts immediately and know when to take action to keep you and your family safe.

Beginning in April 2018, all wireless service providers will have the capability to distribute emergency alerts received from alerting authorities directly to consumers’ WPA-compatible wireless devices using Cell Broadcast distribution. The list of the compatible devices is constantly updated, and can be consulted here.

Wireless service providers will only receive and relay messages that are issued for threat-to-life situations.

You cannot opt out of receiving threat-to-life emergency alerts.

Emergency alerts begin with a distinct sound, known as the Canadian Alert Attention Signal. Emergency alerts sent to compatible wireless devices may also cause the phone to vibrate.

On compatible wireless devices, the emergency alert will display an “EMERGENCY ALERT/ALERTE D’URGENCE” banner, followed by text that describes the situation and provides instructions on what actions to take and where to find more information. At the top of each emergency alert, the issuing government agency will be clearly indicated.

The questions you may ask...

Federally, emergency alerts are issued most frequently by Environment and Climate Change Canada.

Media companies, including television, radio stations, cable and satellite distributors, as well as websites receive these emergency alerts and relay them to their consumers.

The Alert Ready system allows alerting authorities from federal, provincial and territorial governments to issue a wide range of public safety messages. However, broadcasters and wireless service providers are only required to distribute emergency alerts for situations that pose an immediate threat-to-life.

Government officials developed and agreed on a specific list of the types of alerts that are considered a threat-to-life and should be distributed immediately, interrupting radio and television broadcasts. These “Broadcast Immediately” emergency alerts have the highest level of severity, urgency and certainty. For a full list, visit the Alert Types section of the website.

Issuing alerts outside of this list (for example heavy rainfall or blizzard warnings) is at the discretion of each of the broadcasters. Wireless service providers will only receive and relay messages that are issued for threat-to-life situations.

Yes. The alerting authority determines what areas are affected by an incident, weather or environmental situation, and uses a standard system that will typically correspond with municipal, regional or provincial boundaries. The standardized system will allow participating radio, television, cable and satellite companies to broadcast the emergency alerts that are most relevant to the communities they serve.

No. In order for emergency alerts to be received on a wireless device three conditions must be met.

The wireless device must be:

A wireless device that is WPA-compatible is:

Emergency alerts that meet the Alert Ready format allow you to know when an alert is received (because of the sound and vibration), and also provides confirmation that it is issued by a legitimate sources.

Visit the Wireless section of AlertReady.ca to find a link to the section of your wireless service provider’s website that provides information on compatible devices.

Emergency alerts are sent via Cell Broadcast distribution. Cell Broadcast is a mobile technology that allows messages to be broadcast to all compatible wireless devices within a designated geographical area. Cell Broadcast is designed for simultaneous message delivery to multiple users in a specified area, and is not affected by network congestion because it uses dedicated part of the network, different from that used for traditional voice and data traffic.

Cell Broadcast can be compared to radio broadcast. Radio towers broadcast music to people in defined geographic areas as long as the individuals can pick-up the broadcast signal and have their radios turned on. Similarly, Cell Broadcast messages are delivered to those compatible wireless devices that are within range of cell towers and antennas in the designated area.

Wireless service providers are required to distribute Emergency alerts to compatible smartphones that can access LTE (cellular) networks. Additional wireless devices – such as tablets and wearable accessories (e.g. smartwatches) – may be capable, from a technical perspective, to receive some form of the message, but it will not necessarily be received on the device in the Alert Ready format.

For information on compatible wireless devices offered by your wireless service provider, visit the Wireless section of AlertReady.ca.

Emergency alerts will not end or terminate a voice call or data session in progress.

If you are on a voice call when the emergency alert is received, you will be made aware of the alert by a notification tone (similar to call waiting). When your call terminates the alert will be displayed on your wireless device.

However, this behaviour can differ depending on your wireless device and in some instances the alert sound may override your user settings.

Test alert messages will be identified as such. These messages are intended to “test” the functionality of the system, and inform consumer of wireless emergency alerts, and do not require the consumer to take steps to secure their safety.

You may be required to acknowledge receipt of the emergency alert in order to allow for your wireless device to resume normal functioning. In the event that you cannot acknowledge the alert, the alert sound and vibration will continue for 8 seconds. Depending on your specific wireless device, additional reminders may occur.

Also, emergency alerts are sent to wireless devices in a specific geographic area and do not require the phone numbers of those devices. As such there is no ability to identify or bill for the messages that are received.

Unlike radio and television broadcasting, which often has broad areas of coverage; wireless public alerting is geo-targeted and can be very specific to a limited area of coverage. As a result, if an emergency alert reaches your wireless device, you are located in an area where there is an imminent danger.

Yes. Emergency alerts are issued to a defined geographic area, such that only people in the defined area will receive the emergency alerts.

If you are travelling and happen to be in another province when an emergency alert is issued, your compatible wireless device will receive the emergency alert within seconds of being issued, provided your phone is powered on and connected to the LTE cellular network.

No. If you are travelling, you will only receive emergency alerts that occur where you are.

Canadians can keep track of emergency alerts occurring in specific areas (e.g. where they or other family members live) through a number of available apps and online services.

More questions? Ask them on our forum, we will answer you!

Why aren't the Google Pixel phones on this list? It's very strange that you would have a no name phone like the Alcatel GoFlip, but not Google's flagship phones. All other carriers have the Pixel, Pixel XL, Pixel 2 and Pixel 2 XL in their lists of compatible phones...

Hi alexdb! New devices are added based on updates we receive from manufacturers. The list has just been updated: < http://bit.ly/Devices_AlertReady_EN >. Have a good day!

November 28 @ 13h55 (Orléans Ontario) our iPhones successfully received the Government Emergency Alert test message.  We’re very glad this works now and the issues have spare apparently been resolved.  I’m surprised though, of our 3  iPhone 8+ phones, all are on the latest IOS yet none have the “setting” to activate the feature that’s supposed to be an option under System/Notifications.   Anyway, it works now so thank you Videotron.  Cheers! This means that the device will not receive any messages if it's not connected to an LTE network. It needs to be on an LTE network to receive alerts.

AuroreLB Responsable éditoriale
Monday, May the 7th 9:55 am, a test of Quebec Alert Ready

How do I connect my computer to the Wi-Fi 6 of the new Helix Fi 2 gateway?
Keep in touch