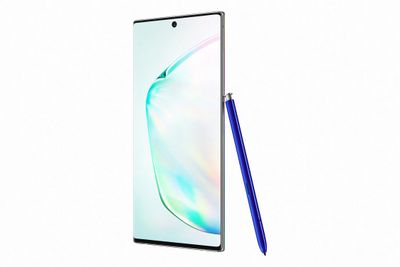 Summer’s end means back to school for thousands of students and a return to work for more than a few adults. It’s also the time when many tech companies release new products, and Samsung is no exception. Now available on the market are its Galaxy Note10 and Note10+ phones. I’ve had the pleasure of giving the Samsung Galaxy Note10+ a test run over the past few days. Here are my first impressions.

The Note10+ awes from the outset with its 6.8-inch (diagonal) display, which is 0.4 inches bigger than the Note9 display. My first reaction: “No way, it’s too big! Will it still even fit in a jeans pocket?” To my pleasant surprise, the device measures less than one millimeter more in height and width than the Note9. Even better, the Note10+ is thinner and, at 196 grams, lighter than its 201-gram predecessor. The increased display-to-device size ratio was achieved by reducing the edges as much as possible, eliminating them on the sides and making them barely perceptible at the top and bottom.

Attention to design detail is also seen in the fine screen bezel on the sides as well as the minimalist camera hole. The speaker is very well-hidden on the microscopic upper edge of the device, somewhat like on Motorola’s Moto Z4. With displays taking up more and more space on devices, this will undoubtedly become the new standard.

Samsung has also included the digital fingerprint reader in the display developed for the S10, but dropped the Note9’s iris reader along the way. If you still want to unlock the phone display with your face, you can always use the facial recognition option.

One important camera addition should be mentioned: a third, ultra-wide angle camera lens on the back of the device. This lens provides a 123⁰ viewing angle and 16-megapixel resolution. Samsung has also made considerable efforts to improve the Note10+’s artificial intelligence with the inclusion of practical new features: impressive video image stabilization, audio zoom that amplifies sound when approaching its source, 4K High Dynamic Range (HDR), an impressive night mode, and more precise augmented reality, all in addition to the automatic adjustments we already know. In short, this is an excellent effort in terms of both software and hardware.

The Note10+ would not be what it is without its S Pen stylus, which has also benefitted from an upgrade. It still connects through Bluetooth, but now includes a more accurate six-axis motion sensor. The S Pen is more than just a writing tool: It also works as a remote to manage the camera, scroll through presentations, or control music playback, all without having to touch the phone. Combined with the above-mentioned augmented reality, the S Pen lets you draw on your physical environment, with your doodles staying where you put them. The new S Pen features may seem frivolous to the average user, but you can well imagine their utility in various professional applications. It may seem like a gadget right now, but it will soon become a new tool that will give full and free reign to the creative potential of developers.

Like its predecessor, the Note10+ is DeX-mode compatible. This means it can be used to sync the phone with a display and keyboard, thereby turning it into a computer. This is an option I really like that deserves to be used. This Samsung exclusive is starting to make sense and has already been adopted in several milieus. For example, the Note10+ will soon be installed, along with displays and keyboards, in police cars in Chicago’s 11th District as a replacement for their current unwieldy computers. According to a Samsung study, this change will save the police department around 30% compared to the previous system.

With the Note10+, Samsung enters the high-end phone market. This little marvel is powerful, elegant and extremely well equipped. While the suggested retail price (CAD$1,500) is likely to turn away more than a few buyers, those who take advantage of its full potential as a work tool will have no problem justifying the expense… As long as they can forgive the lack of a headphone jack!