Your memories in 360 degrees

You’ve probably heard of it, and you may have even tested it: the incredible 360-degree video camera. It generated a lot of buzz a few months ago (or even a few years ago, if you follow tech news).

360-degree video technology is full of promise. Unbeatable immersion, the freedom to watch videos wherever you want, and the possibility to relive moments or to share them with others to make them feel like they were really there. Unfortunately, however, the technology doesn’t seem to be reaching the average person.

In order to get the full 360-degree experience, it’s true that you need a headset that holds your phone in front of your eyes. If you want to create your own videos, you need a 360-degree camera with two or more lenses. So there are a few barriers for the general public.

I had the chance to test a few different 360-degree cameras and see their content using various types of headsets, which varied from highly advanced devices to simple cardboard constructions. 360-degree videos are cool, sometimes even very cool. But as we get wrapped up in our quest to produce ever more realistic immersions, we tend to forget that these cameras can also take photos!

These photos offer a very interesting dimension, such as capturing a full and total view of your surroundings at a given moment.

Your phone or tablet can be used as a 360-degree photo “viewer.” The image shifts as your move your phone. For example, if you move to the left, the image slides with you and shows you what’s on that side. If you point your phone skyward, you’ll see what was above the 360-dgree camera when the photo was taken.

A 360-degree camera will never replace your conventional camera or phone camera, but it will definitely enhance your memories. It’s a terrific addition to your travel gear to help you immortalize special places. Let’s be clear: there’s no sense in buying a 360-degree camera to take the same type of photos you snap on your mobile device. The idea is to give yourself a whole new perspective.

In recent weeks, I used a Samsung Gear 360 camera while on vacation with my family. My parents were at a cabin near a beach with their kids and grandkids—15 people in all. We all took photos with our respective devices and I managed to immortalize a few key family moments. One image has us sitting at the dining table, with the 360-degree camera in the middle. It took a great shot of everyone, including the cake that grandma made.

My family flipped when they saw the photo! It captures a truly memorable family moment. Grandpa was amazed that he could control the view by holding his phone and rotating his body. He even got a kick out of looking at the ceiling lamp.

Immortalizing nature, concerts, your new home and even renovations!

At the beach, my cousins worked hard on building incredible sand castles. And once again, my Samsung Gear 360 camera captured some great additions for our album. By placing the camera between the sandcastles and the sea, we got a single picture that included: the awesome castles, my smiling cousins, blue sky, the ocean and horizon, and endless sand stretching out on each side. 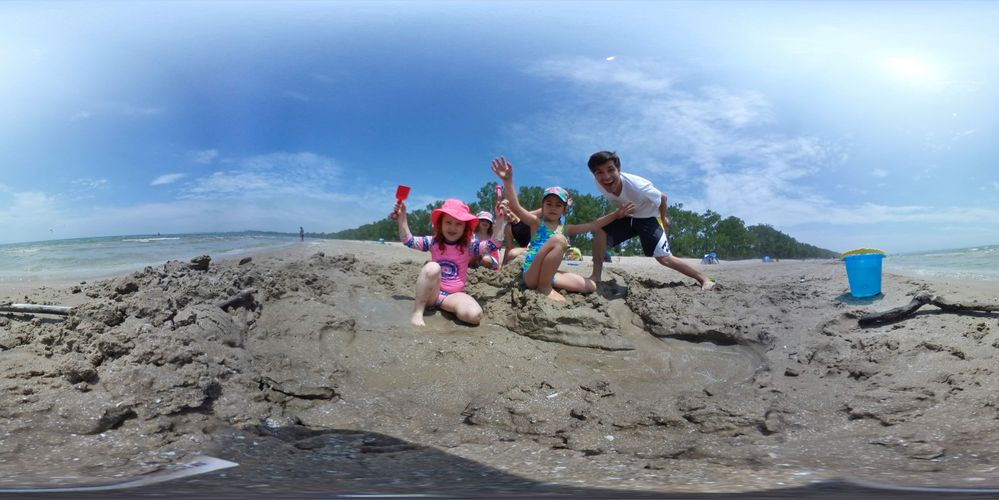 360-degree photos can also offer interesting perspectives if you have a passion for hiking or outdoor sports. Whether you’re at the top of Mount Royal or Kilimanjaro, 360-degree photos allow you to share the beautiful vistas in front, behind and above you.

Back on my vacation, I proudly showed the family photos of my renovated basement bathroom. Yes, I got a 360-degree shot of my toilet, located just steps away from my treadmill. Nice, eh? For amateur handymen or renovations professionals, this is a new way to document your projects and capture before-and-after shots. 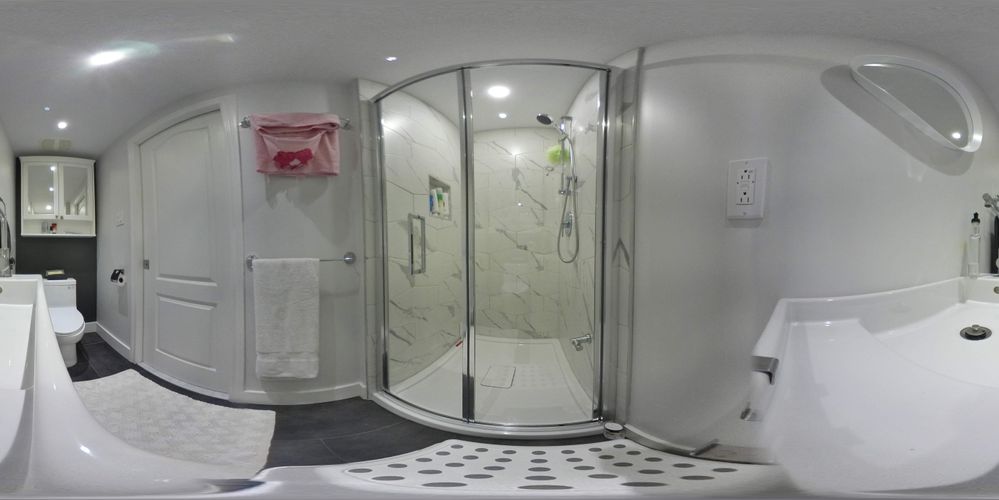 Some real estate agents already offer 360-degree visits of the properties they represent. As these devices become more popular, this type of experience will become the new standard. Just one picture provides a real sense of a room. If you’re a landlord, the same logic applies. In addition to uploading classic photos, add a few 360-degree pics of your rental apartment really showcases the unit. If you’re a renter visiting apartments, take some 360-degree shots of potential apartments so that you can go home and compare your options.

From live music at the local bar to major rock concerts, one click is enough to give a full appreciation of the scene, including the band, the wings, the crowd, the sky or the lights overhead.

As soon as you mention 360-degree cameras, people naturally think of videos and overlook photos. And yet, 360-dgree photos are easy to shoot and create a real “wow” effect.

In fact, Facebook allows you to share 360-degree photos and videos. If one of your friends shares a 360-dgree photo, you’ll know right away. Facebook acts as a viewer and you can enjoy the immersive picture directly in your newsfeed.

People are increasingly interested in virtual reality, augmented reality and 360-degree videos, but 360-degree photos are quietly making their way into our lives, offering highly original and good quality views of our most special moments.

Have you tested 360-dgree photos and videos? Where and how?