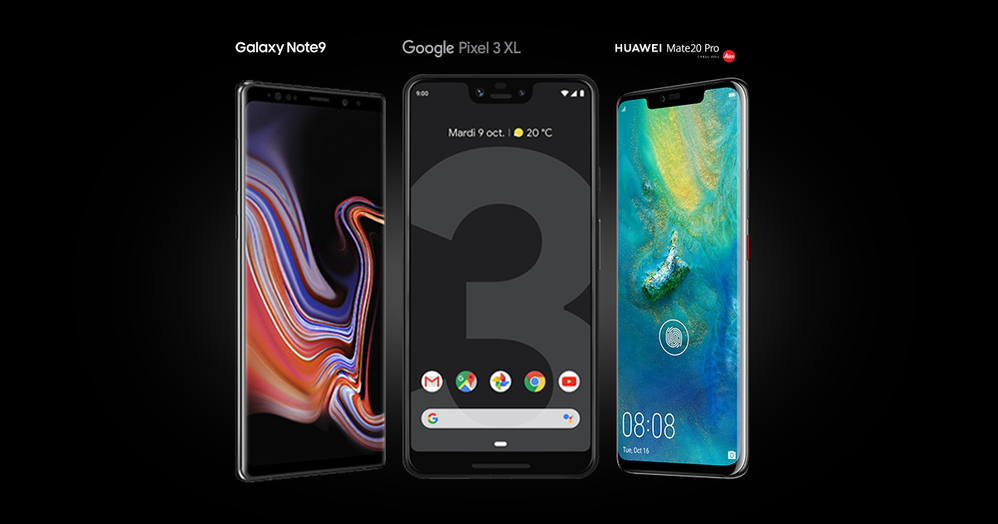 2018 was a big year for smartphones. While Apple upgraded its iPhone X lineup with impressive—but predictable—new features, Android devices had a particularly strong showing in 2018.

Here are three phones I enjoyed and used most in 2018, as well as some of the exciting features that set them apart.

It does it all, and it does it well: Samsung's Galaxy Note 9 is the epitome of versatility!

The Galaxy Note 9 features several notable improvements including longer battery life, enhanced AI for photos and DeX software that turns your cell phone into a desktop computer when you use an HDMI adapter to connect to a monitor.

Plus there’s the S Pen stylus with Bluetooth technology and wireless charging. Perfect for editing presentations and images or adding notes to text and photos, the S Pen is now just as good for business as it is for pleasure. For example, an electrician might use it to add a diagram of an electrical system to a photo of a room in order to get approval for work. The S Pen also works as a rudimentary but practical remote control.

Check out my video on the Samsung Galaxy Note 9 here.

The Pixel 3 XL is the quintessential Android device and it stands out with innovative features.

The Pixel 3 XL uses AI to help users sort photos and improve their quality by picking the best shots and detecting facial expressions. It also features enhanced interactivity with Google Lens, which can recognize objects and automatically run a Google search on them. It even lets you take funny photos with virtual characters thanks to augmented reality. The camera’s technical specifications have also been upgraded with ultra-sensitive sensors and wide-angle selfie shots, meaning you can put away that selfie stick for good!

Finally, the Pixel 3 XL supports the commitment to “digital wellbeing” expressed by Google and other companies in 2018 by giving users insights into how they interact with their device. It remains to be seen how many technology addicts will be cured this way!

Live from New York City, check out my presentation of the Google Pixel 3 XL in this video.

Find out how you can get your hands on a Pixel 3 XL by clicking here.

In 2018, China-based Huawei overtook Apple to become the world’s second-largest cell phone maker behind South Korea’s Samsung. Huawei has sought to expand its presence on the North American market with the very impressive Mate 20 Pro. The phone boasts a polished design, with a screen that takes up almost 88% of the front of the device, leaving a narrow border at the base and a notch at the top. To maximize the display, the Mate 20 Pro includes an in-screen fingerprint sensor, eliminating the need for a separate button to unlock the device. For even faster access, it also features 3D Face Unlock functionality.

Interestingly, the Mate 20 Pro lets you use your phone to power other devices. How useful is this feature? The jury's still out on that.

The main camera system was designed by German manufacturer Leica, and it's sophisticated enough to give the industry’s biggest players a run for their money. With modes like Portrait, Night Shot and Macro, the Mate 20 Pro has it all!

Finally, like the Samsung Galaxy Note 9, the Mate 20 Pro can be connected to a TV or monitor to offer a desktop-like experience.

With features like these, there’s no doubt that Huawei will continue winning over North American fans.

Check out my detailed review of the Huawei Mate 20 Pro in this article from the Videotron forum.

That’s all for the smartphone scene in 2018, a year that saw lots of improvements and a handful of innovations. While it may not have been a revolutionary year, it did include some solid new releases. What does 2019 have in store for us? Folding screens? The disappearance of the notch? Enhanced battery life?

Now let’s hear from you! Tell us about your favourite new device of 2018 and the new features you anticipate in 2019!