Motorola moves forward with its signature mods and fresh improvements 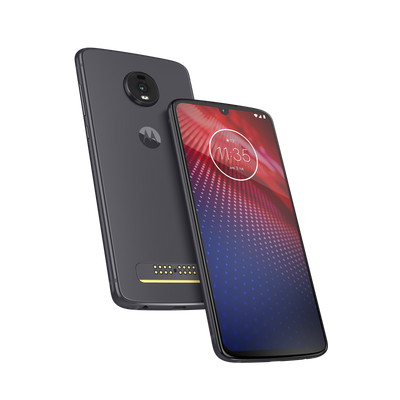 “If it ain’t broke, why fix it?” were the words most likely top of mind for the Motorola design team when working on the Z family’s newest arrival: the moto z4.

Motorola’s most recent release has sashayed into a hot market that’s showing no sign of cooling down: the $900 and under club. Although the moto z4 can’t be qualified as innovative, it is equipped with current tech and, above all else, is corporate strategy affirming vis-à-vis moto mods.

But what is a moto mod, exactly? Valid question. Basically, it’s an integral part of the modular cellphone model. Other companies have tried, but Motorola is the only company to have gone the distance with the concept. In a nutshell, mods let you customize your phone and make it do things you’ve always wanted it to do. Motorola has developed a series of peripheral devices (mods) that you can stick to the back of your phone by way of built-in magnets. There’s a speaker system, a battery with extra-long life, a Hasselblad camera, and even a miniprojector. Details here: https://www.motorola.ca/moto-mods

To remain moto mod-compatible, the new z4 had to be the same size as its predecessors, meaning the device would have to grow on the inside. First off, the front of the device features an edge-to-edge display with a minimalist frame and a tiny 8 mm wide slot for the selfie camera, with the speaker remaining tucked away into the upper part of the frame. That’s where the 6.4-inch screen (diagonally speaking) comes from—as opposed to the z3’s 6 incher. The screen-to-device ratio is a surprising 85%. More picture, less frame: a common trend in newer phones.

The inside of the device has also benefitted from a tech upgrade, starting with a more powerful processor—the Qualcomm Snapdragon 675—bringing the traditional 4 Gb of RAM and 128 Gb of storage to consumers and the option to add more via microSD card (love it!).

The z4 comes with a whole slew of features, too: accelerometer, compass, gyroscope, proximity sensor, and adaptive brightness, to name but a few. Just like pricier models, the digital fingerprint reader is built in to the screen. Finally, the newest moto boasts a 48-megapixel camera. Just to clarify: the 48 Mpx refers to the sensor, but the data is processed in such a way that the resolution ends up coming in at just 12 Mpx. That said, Motorola has brought serious added value to the table when it comes to photography AI: cropping suggestions, colour correction, low-light photography, augmented reality, and more still. Something for every Insta user! Oh, and I almost forgot…the z4 also comes with FM radio—which I’m 100% into!

Now let’s talk moto mods. If you’re someone who’s already invested in these peripherals, rest assured that they’ll work with the new moto z4, too. Already have one of those extra batteries (Moto Power Pack or TurboPower Pack) or mods (JBL SoundBoost speaker or Insta-Share projector)? Motorola has you covered—they’re all z4 compatible. With the Moto Gamepad and 360 camera, the Z clan continues its growth spurt. For the more nostalgic among us, Motorola partnered up with Polaroid to offer the Insta-Share printer, which, in keeping with its name, is an instant printer that produces 2” x 3” photos with a self-adhesive backside. What’s more, this peripheral doesn’t use any ink (ZINK Zero-Ink paper) and comes with its very own battery. Yet another fine addition to Z versatility.

At the end of the day, the new Motorola moto z4 isn’t innovative or revolutionary. Technologically speaking, it does what everyone else is doing. That said, the built-in camera system, paired with all the moto mods already on the market, make this device a viable candidate for any shopper looking for versatility without having to shell out $1,000-1,200 for the latest device. Hot tip: Videotron will gift you a Polaroid Insta-Share printer upon purchase of a z4.

So what’s your take on the modular smartphone? What kind of mod would you like to see made?